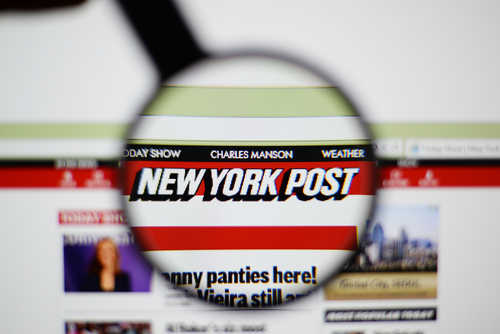 “GOOD MOANING AMERICA!” ran on the front page, which featured a photo of the co-hosts of Good Morning America. It stated that the two were not ashamed of their extramarital infidelity.

The NY Post writes the best headlines, don’t they?

According to the Post’s gossipy Page Six, Holmes and Robach returned to work proud of their relationship.

A source told the publication that Holmes and Robach are not ashamed.  They are two consenting adults who adore each other.  It’s not how they wanted knowledge of their relationship to come out, but it was a relief.

According to the report,  Holmes will divorce his wife, Marilee.

A second insider told the gossip section that when Holmes was having problems with his marriage again recently, the only person he could count on was Amy.  Amy was the first person Holmes contacted. No one knew he was divorcing until yesterday.

That Amy. What a saint.

Amy Robach was also having marital problems. She divorced her husband, Andrew.

According to the report, suspicions of secret rendezvous began as soon as they became acquaintances in 2014, and rumors of them hooking up at separate events in 2017 spread like wildfire on ABC.

The second informant added that the couple was reportedly hesitant to even be near each other because of the rumors. They became terrified. The stories weren’t true, and after that, they were afraid to hang out together or be on-air and be too friendly.

The report reveals that now that the rumor is confirmed, don’t expect to hear an on-air confession from Holmes or Robach.

Despite arriving at the studio as a couple, they both remained tight-lipped about the issue when they appeared on their show, “GMA 3,” Thursday afternoon.

According to Page Six, ABC has stated that Holmes and Robach will not be penalized for their relationship on the job.

ABC screws the public with misinformation, and it looks like they’re doing it to each other, too.